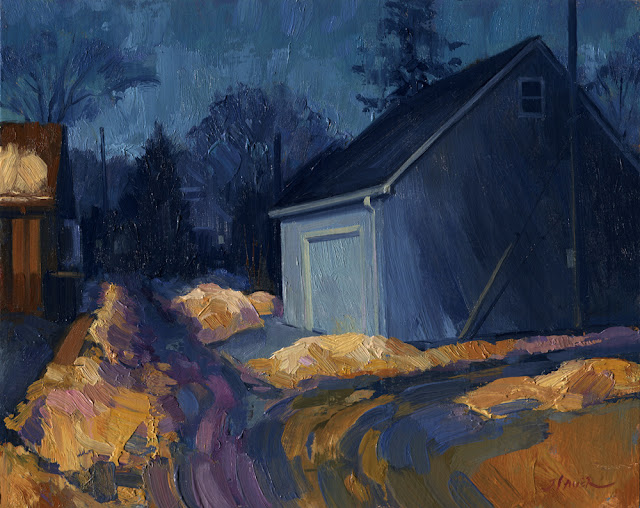 Here it is, #100!
This last one is the same location as the first. Here's #1 for reference: https://100alleys.blogspot.com/2012/08/the-first-one.html
Knowing that I was going to finish this project up this year, this last one was done from a photo earlier in the year when we were getting hit with one snowstorm after another. I wanted it to share the same winter evening setting as number one. In the years between, the owner of the blue garage tore down the old one and built this big new one.
Many things have changed in the time it took to do all 100. As I've said to many who asked, this took MUCH longer than I thought it would. When I set out to do this, I thought it would maybe take a year or so. Here I am 7 years later. As I settled into these, I realized I wanted to do something more than mostly sketches. I started trying out different mediums, experimenting with mono-type prints, digital paintings, and started doing small acrylic and gouache paintings, but over time they got bigger as I switched over to oil paint. This whole project turned out to be a big education to me. I literally re-learned how to paint. I took a deep dive into landscape, plein air, and still life painting. I obsessively dug into oil painting techniques. I spent most of my time searching out books and videos, endlessly reading blogs of painters I admired, and practicing, practicing, practicing all the time. It was a bit like a self study graduate course. All that effort completely changed how I look at and approach all the work I do now. And after all of it, I feel like I've only scratched the surface.
I'd really like to thank everyone that followed along and supported this! I had hoped to do something interesting and maybe sell a painting or three along the way. I didn't think it would have a whole life of it's own. About one third of these were small sketches that I've kept. There were a handful of prints (monotype, block cut, and digital) that are all gone now, but the rest were paintings. Of the nearly 70 of those, there are only a handful left currently hanging at The Coffee Shop NE through Dec. 15th 2019. I had some vague plan of doing a show with all the paintings, but I didn't expect it to take so long, or for them to be so popular along the way, so it was nice that The Coffee Shop NE was able to get me on their schedule to hang the last of these. It was the second place I ever hung the alleys (the first place is long gone).
It's really nice that so many folks connected with these. I enjoyed talking to everyone about them. Often, I'd post one here and on FB, etc. and almost instantly get an offer to purchase it. I've even shipped a number of them out around the country to Minnesotans living elsewhere. A few nice people have more than one. I just met with a someone this weekend who bought #99 - he has five alley paintings!  (and a still life - thanks Tom!). Over the course of it, the project was featured in the local paper, I was asked to sit on an alley themed discussion panel a couple years ago, and I was invited to a local podcast. I still haven't done the podcast - too shy I guess. And as much as I've learned about Minneapolis' alleys, I don't feel like I have any deeper insight. In the end, I still feel like I did at the beginning,they still catch my attention, and I can't help but to slow and check them out. From the post for alley #1, " I've always liked the alleys in the Twin Cities.  They're far more interesting than the streets out in front of the houses." It's still as simple as that, I guess.

Thanks again everyone!!!
-John
Posted by John Sauer Art at 2:35 PM No comments: 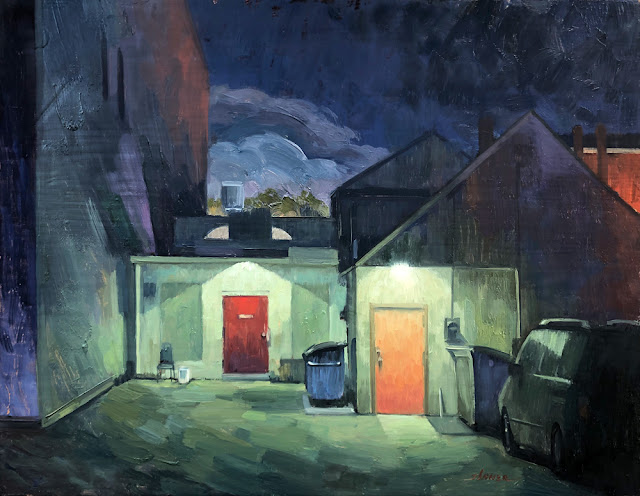 Well, it's been a while, but here's number 99! ....almost done.
This alley caught my eye when we were up in NE Mpls. one late fall evening. I'm not sure
which business this is the back of, but the light was great. It was that time of evening
just past sunset and not fully dark.
This one will be hanging and available at The Coffee Shop NE Nov. 14th through Dec. 15th.
Number 100 will also be there, but you have to visit to see it before the everyone else....I'll share that one here in a couple weeks. The Coffee Shop NE will be featuring the alleys in what may likely be the last full grouping of the remaining alley paintings. Get yourself over there and check them out! 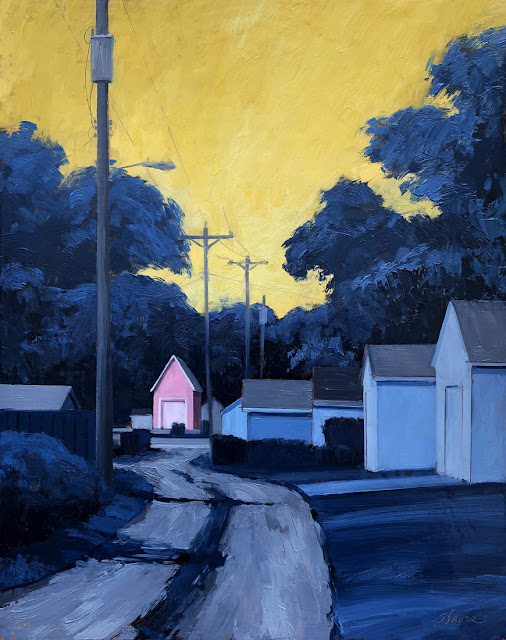 Another one of those somewhat rare gravel alleys that I found and
also another that has been on the to-do list for a long time.

Posted by John Sauer Art at 1:41 PM No comments:

Posted by John Sauer Art at 2:33 AM No comments: 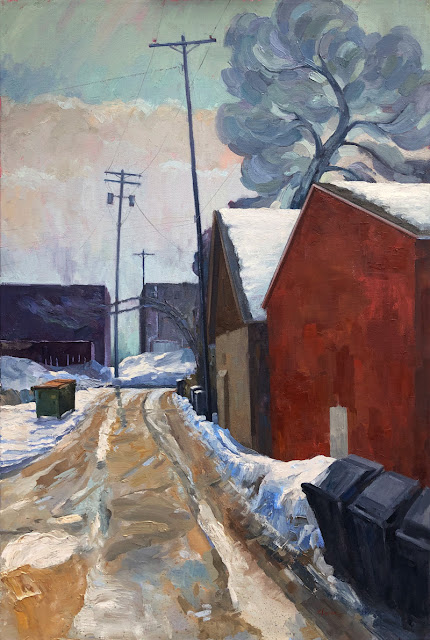 We had quite a winter here in the Twin Cities.
This alley seemed like a good representative.

Posted by John Sauer Art at 2:33 PM No comments: 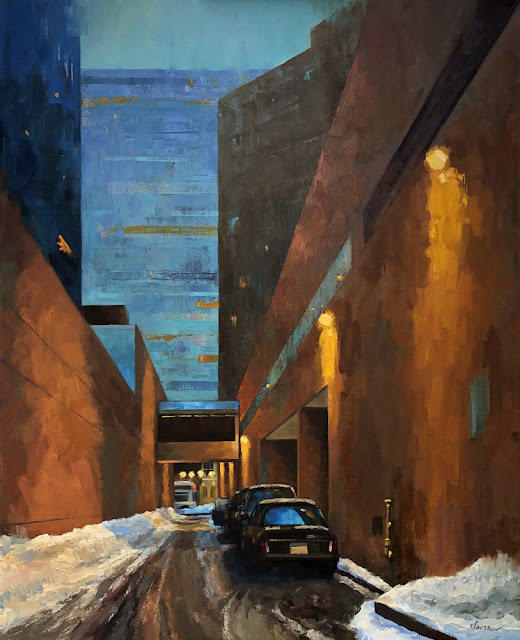 I love how the buildings downtown can sometimes overlap, cross, or intersect and what seem like unnatural angles. As I have been doing recently, I was shooting for simplicity with this. I blocked most of the buildings in with a brayer, a 3" drywall knife, and an 8" squeegee. To finish, I stuck with the largest brushes I could use (a number 4 flat was the smallest). I pushed all the color saturation of the grays and browns toward blue and orange. It was nice to do another alley.

Sorry these are so few and far between. On the plus side there have been new opportunities that have been exciting.
Posted by John Sauer Art at 12:16 PM No comments: 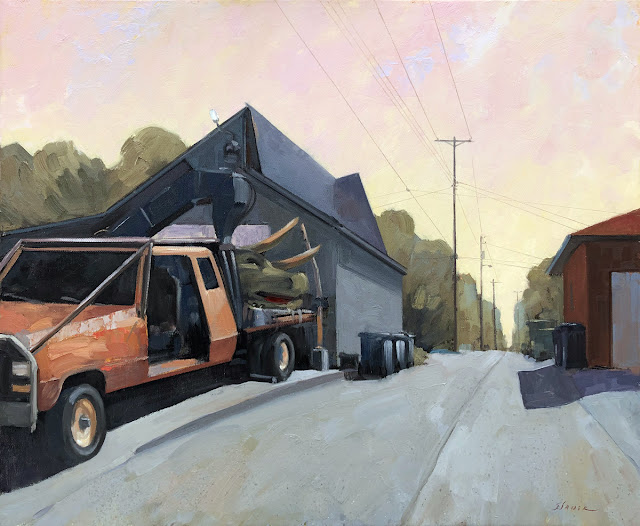 #94 - East 31st Street Near Portland Avenue South
20"x24" oil on canvas
-
It was nice to get back to these. I didn't force myself to try anything unusual, or add any restrictions, so it was enjoyable to just art for the enjoyment. And yep, that's a dinosaur head on the back of that truck. I drove past this in the early fall and had to make a run around the block so I could snap some pictures. The garage and truck are equally interesting. I have a feeling some creative types live there.
Posted by John Sauer Art at 2:33 PM No comments: 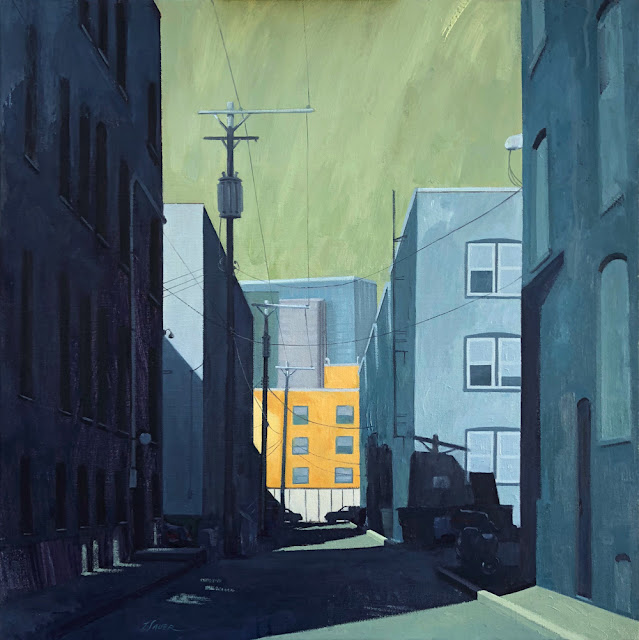 Here we are at number 93. This is another one from the Stevens Square neighborhood.
There are so many good ones over there!
Again, I'm pushing color and contrast while simplifying shapes.
I was very tempted to go full abstract with this. I did a few color thumbnails to make
some color choices and really liked them, but decided to try and find a middle ground.

Posted by John Sauer Art at 1:37 PM No comments: 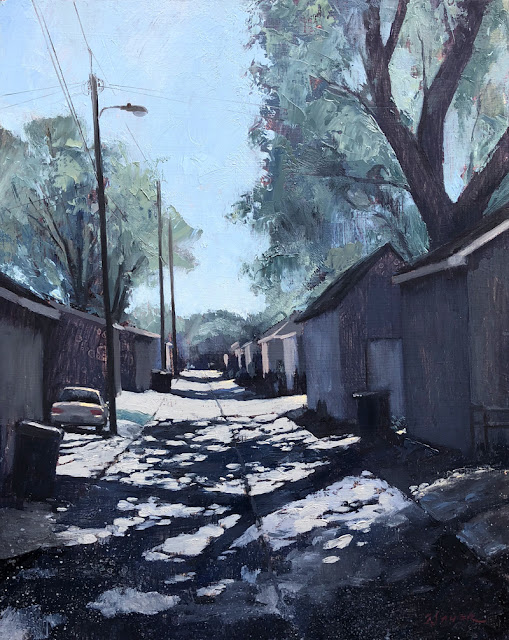 One from the far Southeast corner of Minneapolis.
This alley had a nice shady, cool feeling and I used
an all cool, limited color palette to push that even more. 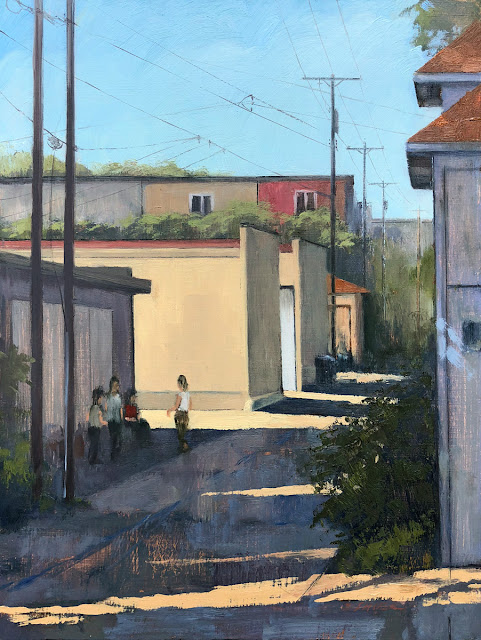 #91 - 32nd Between Girard and Fremont Ave. S.
12"x9" oil on panel
-
So, I'm into the last ten of the one hundred. I had all sorts of ideas about
what I was going to do. The best laid plans and etc., etc.....
At this point I'm still experimenting on these. For instance, this one had a couple things
going on. I used a color palette that I would never normally use, just to see how I
could make it work for me. I used Alizarin permanent, Cad. Lemon, Viridian, and white.
I added Cobalt blue and Raw Sienna to keep the others in check. It might have been interesting
to run those heavy colors full tilt, but maybe another time.
I'm also still working on simplifying shapes, pushing contrasts, adding in things like soft graphite, and using odd housepaint brushes, scrapers, knives, squeegees, and ink brayers while building it up. I'm already looking ahead at what I can use to tackle the next one.
But at number 91, I'm still having fun with 'em. 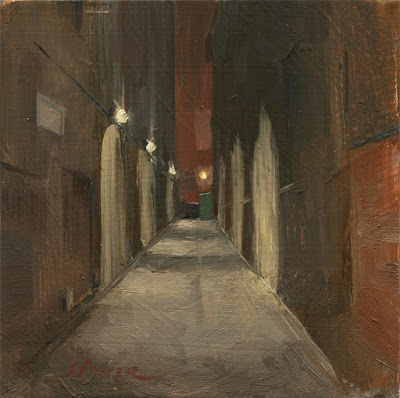 1st Near 4th St. N.
6"x6" oil on panel
-
This small one is from a photo my friend Mike sent me a while back.
Up to this point I haven't used any photos that I didn't take, but this one
stuck with me. I kept it as a reminder to check this location because
I liked the look of it. It has an eerie, lonely quality. I had some time one
afternoon between things recently and just went ahead and painted this one
from the photo I had.
Posted by John Sauer Art at 12:19 PM No comments: 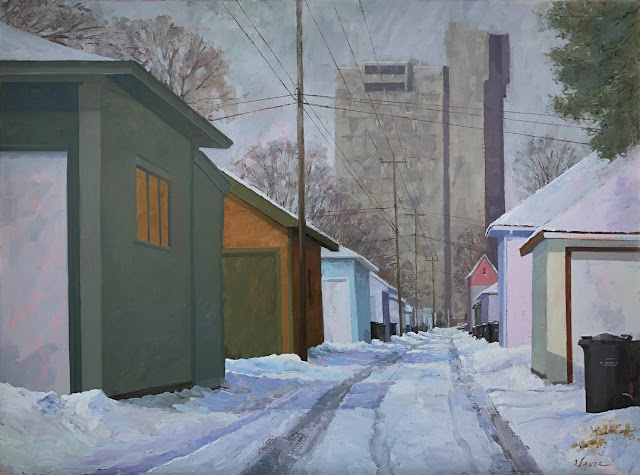 #89 - NE 15th Ave. & Washington St. NE
18x24 oil on canvas
-
I haven't done one of these at this size in a while. I spent a little extra time
experimenting with it, trying a few things that I've picked up along
way doing smaller alla prima and plein air work.

Posted by John Sauer Art at 1:23 PM No comments: 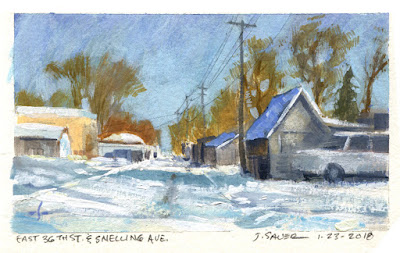 I wasn't going to post this one because it seemed too loose and sketchy, but then that's what changed my mind. I found an old pocket Moleskine sketchbook full of alley sketches and paintings on a shelf and it had a page prepped for another small alley, so I did one. After a few years away from doing them that way, I realized my approach to these has changed a lot. And I'm happy that it has.
So, here's a recent little winter scene from Southeast Minneapolis. 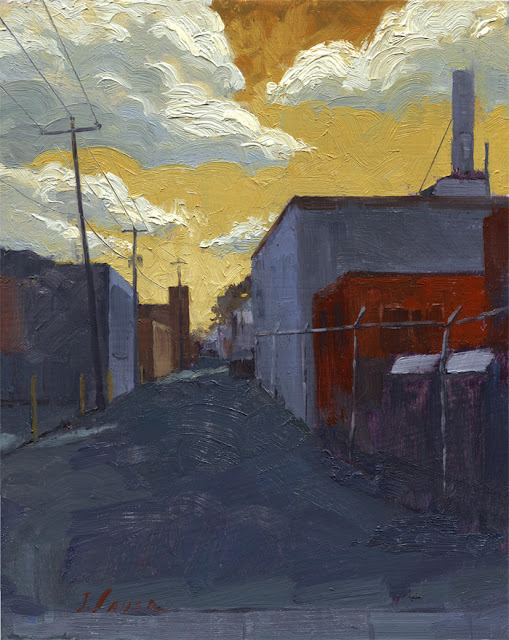 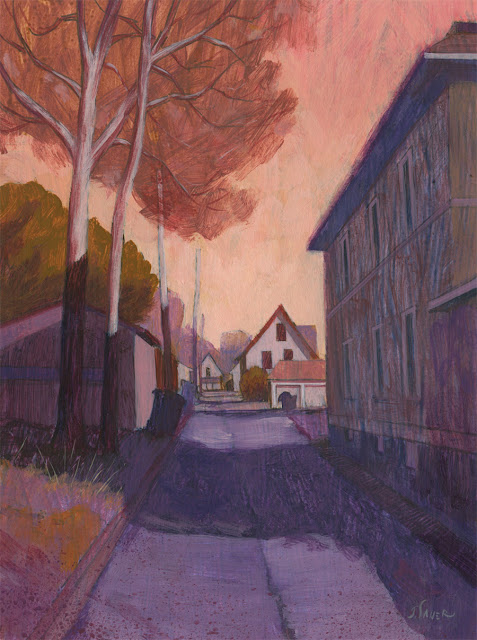 I've been revisiting limited color schemes again. I really like
the mood it gives depending on the group of colors.
And it's a reminder not to get too stuck in any one way of doing things.

Strathmore Mixed Media paper.....
I don't usually mention specific supplies, because who really cares...
but man I like that stuff!
This one does what I need, when I need to do it on paper.
/geek
Posted by John Sauer Art at 1:20 PM No comments:

Sketches, drawings, prints, paintings of Minneapolis alleys - all done by me. 100 seemed like a good number, so I went with that. I'll add new stuff on a (semi) regular basis.
Thanks for looking! --J. Sauer